Like an oasis in town, Mob Hotel Saint Ouen has become the main attraction in its neighbourhood.

The hotel was thought as a place that respects the environment and opens its walls to everyone in a cosy atmosphere.

Located in the heart of St Ouen, the Mob Hôtel is located close to metro lines, and makes it a great location if you’re visiting paris.

In addition to modern and comfortable rooms, guests and neighbours can enjoy a stop at the restaurant that serves organic ingredients, and a dynamic bar with many musical happenings.

The terrace is used as a bar in the summer season and as an ice rink in the winter.

Mob Hôtel is also a place that is very committed to the environment and is very attentive to how it operates.

In particular, they recycle their organic waste, make their own green cleaning products and no single use toileteries can be found in the rooms.

A veggie patch to grow the restaurants herbs and bee hives, complete the scenery.

Mob also has a social and solidarity approach, by supporting associations and missions in France and abroad or by hosting a free social fashion school Casa 93, which is open to young people from priority districts and trains students on slow and ethical fashion design. 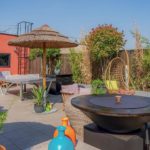 Are you a business owner committed to sustainable tourism ?
Create your page on Holiable and show travellers how your initiatives have a positive impact

Join as a pro

Create a free traveller account and start saving your favorite places to visit, or review the ones you have been to!