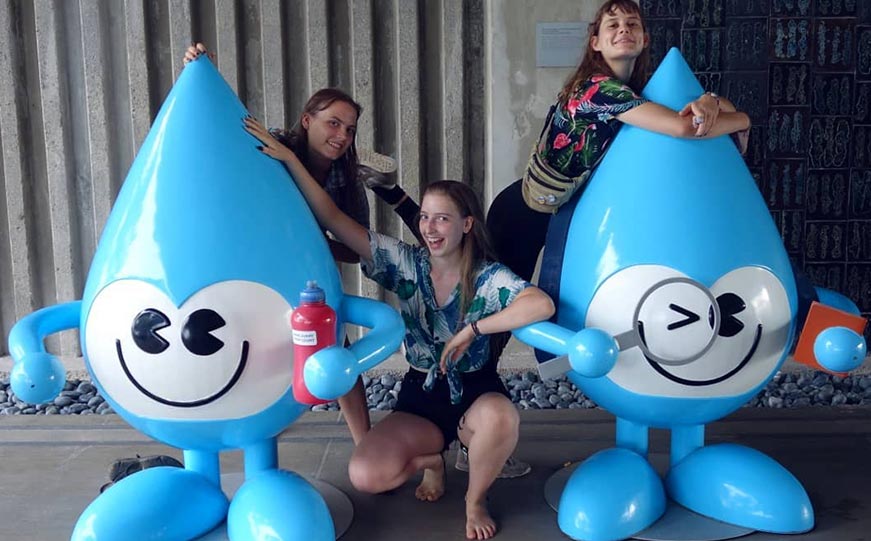 Conscious that a common issue for the world is the water crisis, Emma, Elena & Nina, took the opportunity of an 11 month trip across south east asia, to raise awareness around the subject and its impact on people’s daily lives.

Their ambition? Understand how people live with water in the countries they visited and share their experiences with their audience

In today’s sustainable traveler stories, we meet these three eco-friendly german travelers, to talk about their project named Libertàqua.

Hi Ladies, how did the idea of Libertàqua emerge?

We graduated from high school in 2018 and decided to take a gap year to travel.

We’ve always been interested in environmental issues and have witnessed how the climate crisis is coming to a head. Before leaving, we already engaged with fighting climate change through various projects with other advocates from Greenpeace and Amnesty International.

Libertàqua was the idea of continuing this fight during our trip.

Environmental issues are more relevant than ever and traveling to different countries is a great way to open your eyes to new perspectives on this matter.

Tell us more on the purpose and your actions 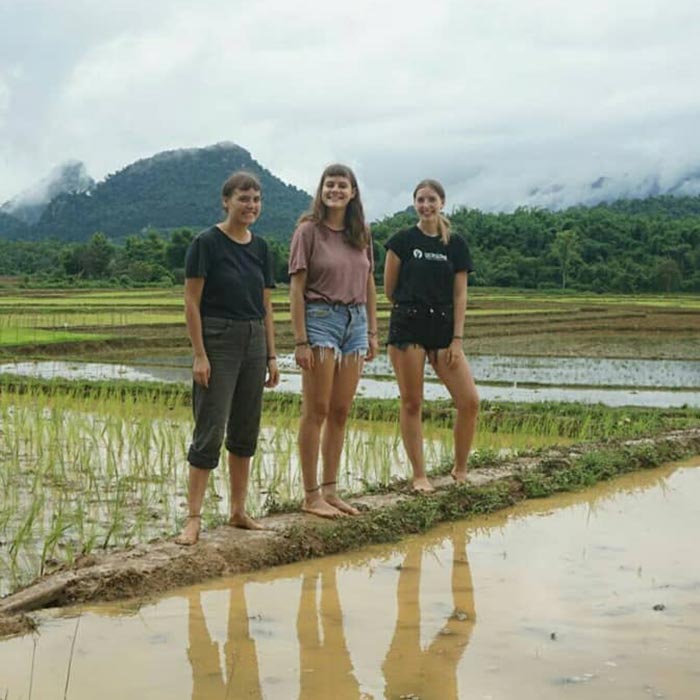 “Libertàqua” is derived from the Italian word libertà, which means freedom and aqua, meaning water in Latin.

We want to raise awareness about water issues, mainly in Southeast Asia, and how they affect people in their daily life.

We interviewed many different people we met on our way to understand how they live with water and what the water crisis means to them.

Some of them were experts from the water sector who gave us a better understanding of specific issues, but most were people we met just where we were: lodging in the same hostels, visiting the same events, or merely waiting for the same bus as us.

We also produced monthly podcasts for a local german radio in which we focused on specific water-related issues like the endangered Mekong delta, privatization of water supply or the impact of tourism for example.

Which countries did your journey lead you to?

Our route as influenced by our decision not to fly; that determined which continents we could go to commuting solely by train & bus and fixed that we would spend more time along the way than most travelers do.

Why did you choose to boycott the plane? 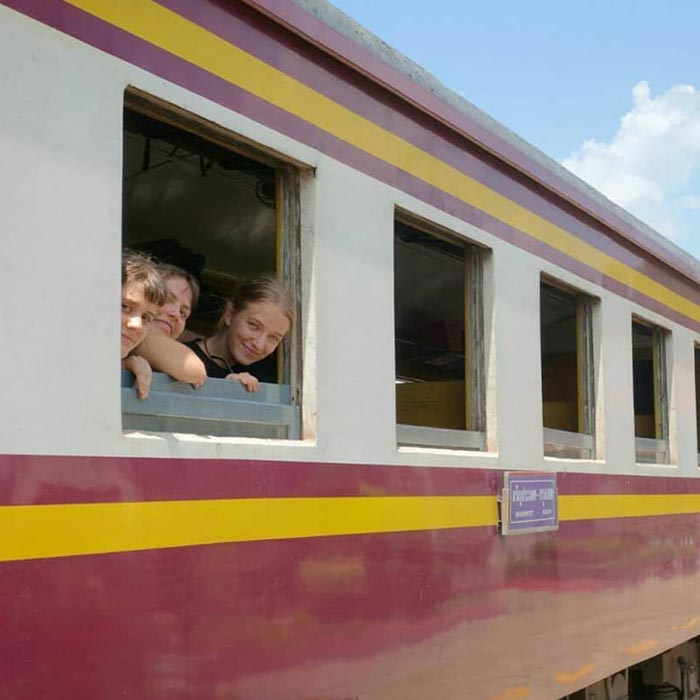 Traveling for one year to another continent increases your ecological footprint massively, no matter how hard you try.

A significant impact is transportation. One transatlantic flight can add as much to your carbon footprint as a typical year’s worth of driving. Even more shockingly: flying turns out to be on average, 50 times worse than driving in terms of a five-year warming impact.

Those numbers convinced us to boycott planes on our journey and probably for a lifetime.

Of course, our 25,000 km route still boosted our CO2 emissions, but significantly less than by plane.

As it turns out, not flying was a fantastic idea, enrichening our travels in more ways than we would have imagined.

Taking the slow route gave us a better understanding of the countries we visited, as we did not quickly “jump” from one city or even country to. We experienced blissful and often unexpected moments in small towns and villages, weird waiting halls, meeting many friendly people.

Did you feel the water crisis was more important in some countries vs. others? 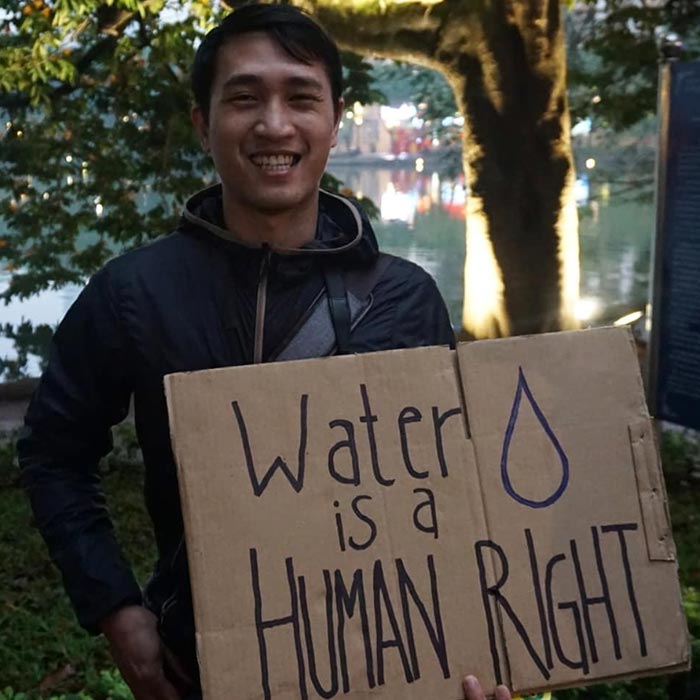 The objective of our project was to get testimonials and impressions wherever we went, but by no means are we experts.

What we can tell you is that we’ve encountered the water crisis in all forms and sizes along our route.

Not necessarily water scarcity, spreading deserts, and people suffering under thirst; things that first come to mind when thinking about water crisis.

In Southeast Asia, the climate is humid, with constant heavy rainfall during the rainy season and many lakes and rivers nourishing the countries.

The issue here is about the lack of water supply and wastewater systems and the pollution of natural water resources with plastic and industrial and agricultural sewage.

It’s about the impacts of climate change like storm floods and changing patterns of the rainy and dry season, which damage crops and fish stocks.

It’s hard to tell which region is affected most by it; the water crisis, for us, doesn’t part countries but rather social classes.

Those who are affected most are those who don’t have the means and get little to no support from their governments.

People from rural areas, for example, are more likely to lack safe water than those from urban areas, no matter which country in Southeast Asia.

Those who have money can afford water filtration, whereas others depend on water that doesn’t meet the health standards we are used to in European Countries.

Is there a water problem that struck you in particular?

It is also called the lifeline of Southeast Asia as the fertile soil along the stream is crucial for the harvesting of rice that nourishes millions of people and is the biosphere for countless species of animals and plants.

A combination of various factors leads to the subsidence of the delta region :

All these endanger the fragile balance of this unique ecosystem, thus making the delta region much more vulnerable to the impacts of climate change and threatening many people’s livelihood.

Were the people you interviewed, all aware of the water crisis ?

We spoke to many people about their perspectives on water and water issues.

It’s important to mention that we mainly talked to people who were relatively well off, usually lived in cities, and whose lives were not directly threatened by water crisis.

However, their daily water use was often not as easy and convenient as in ideal circumstances.

We noticed that all of them were used to the state of how things are but knew of circumstances much worse happening in their countries. That is why many of them wouldn’t call out their situation the way we would do with our background.

We also met countless people who live in big cities like Bangkok, Phnom Penh, or Shanghai or villages nearby the coast that will be flooded by the year 2050.

We noted the awareness about this danger is not very widely spread.

The threat of being forced to leave your home because of ground subsidence and the rising sea levels seems distant, although the damage of flooding is already severe and visible.

To give you just one example, we spent a week on a tiny island in Cambodia where, over the course of the last eight years, 10 meters of the coastal beach have disappeared.

You’ve been on the road for 11 months, what is being a sustainable traveler for you?

First things first: do not leave your sustainability practices at home.

It might seem obvious, but sadly for many tourists we met on the way it is not.

Almost as if being on the other side of the planet was a free ticket for leaving trash behind, buying unsustainable products en masse, taking short-haul flights to save a few hours.

Daily, we try to limit our carbon footprint wherever we are.

On a final note, an essential aspect for us is to be conscious that when we travel we support many different businesses of the tourist industry.  That’s why we try to give our money to small businesses. They are more likely to have a positive impact on local populations, their profits going directly in the local economy.

What are your next plans for Libertaqua, now that you are almost heading back?

We’re currently working with a youth group of an NGO and students from our former school who are organizing a project about water for the global climate strike on November 29th.

We provide them with information and will also be doing an action day around the water crisis together once we get back.

We still have many interviews that aren’t published yet, so we will continue to upload content on our website for a while.

We will never stop advocating about the issue of water crisis because it’s getting way too little attention considering that it is about the basis of life.

Any questions for Emma, Nina & Elena ?Start the discussion in the comments