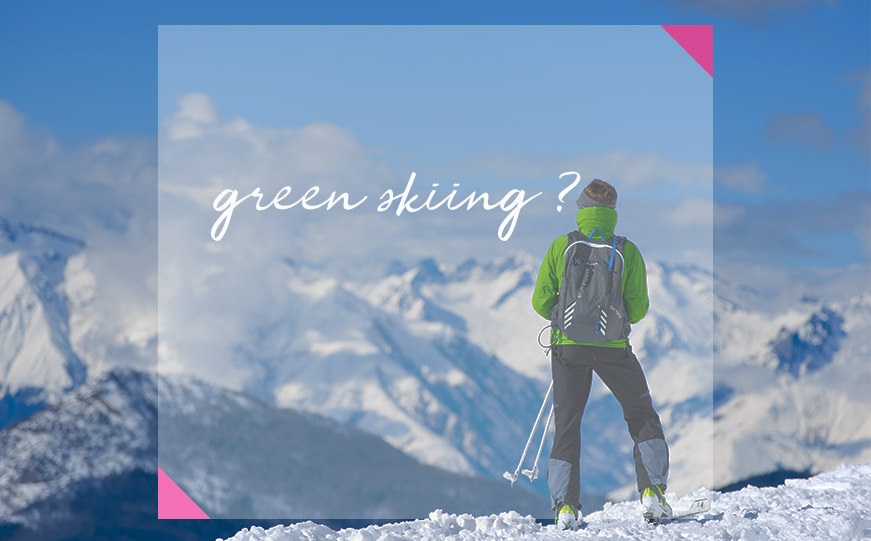 Whether you’re heading to the slopes for your next holiday break (ah spring skiing) or simply enjoyed the Pyeongchang winter Olympics on your TV you might have asked yourself the same question as us: can skiing be green?

This season has been generous in snow in many areas to the joy of worldwide skiers but if there is one place, where climate change has shown it’s impacts quite tremendously, it’s in the mountains.  A swiss study published in 2017 in The cryosphere from the Institute of Research on Snow and Avalanches, predicts that we may not be able to ski below 2500 m altitude by the end of the century. Indeed, by then if no action is taken, the Alps could lose 70% of their snow cover.

What are the environmental impacts of a snow resort?

If you were never stuck for hours on the road to go up to your favourite resort, you should play the lottery. 57% of greenhouse gas emissions in French ski resorts come from transport. Mostly to get there, but also once you’re there. A good start to be an eco-friendly skier is to reduce your transport footprint by choosing the right transportation to get to your favourite resort. Choosing a car-free retreat is also a good idea : you’ll breath better, be able to ski to the front door of your lodging, and maybe you’ll discover the joy of sending the kids to buy bread in the morning because they’ll be safe.

A lot of ski resorts have set car-free principles, but not all systems are the same. Be sure to look it up and see what resort fits best with your idea of what a carfree resort should be.

Looking for a carfree resort?

Some resorts have put the level slightly higher with buses, taxis and hotel shuttle buses are all electrical. It’s the case in Zermatt Switzerland.

Would you cancel your trip if there was no snow? Do you know that some resorts offer guaranteed snow insurances? That’s because most of them rely on artificial snow and without snow it seems difficult to attract tourists. And obviously fake snow can have important impacts.

As you would imagine, water is high on the list. Avoriaz, France for example has 25% of it’s domain covered with artificial snow which means the consumption of 80 to 150 thousand cubic meters of water to produce their snow, that’s equivalent to 26 to 50 Olympic pools. Artificial snow is also very energy demanding and is even more impacting than water consumption. “Fake” snow has also had a lot of bad press because some of its impacts are quite difficult to measure, like the effect of leaving a permanent snow cover on the mountain and the effects on the biodiversity.

Nevertheless, it’s true to say that eco efficiency is now part of the strategies of major resorts and that the industry is working to reducing the negative impacts of artificial snow.

The mountain is the home of fragile ecosystems. Wildlife should be preserved, and the winter period is the toughest season for them. Skiing responsibly also implies better choosing your tracks to respect biodiversity. We came through a nice campaign from Be part of the mountain to raise awareness on the subject among mountain riders and free riders. The site is worth a visit and their video makes it quite clear

Keep that trash in your pocket

During the season, the number of tourists heading to the slopes is massive even if a recent study showed that Millenials seemed to be less attracted by wintersports holidays these days. Still with such an amount of people, the impacts are high on transportation, electricity generated by tourist lodgings, not to forget the waste that is generated.

Of course, most resorts offer recycling bins like any other place, but some non eco conscious people seem, as they do in the sea, to forget that their trash will not auto degenerate with snow contact. According to the French association Mountain Riders 150 Tons of waste every year are trashed in the mountains of which 40% are recyclable. 36% of that waste is thrown by the tourist themselves.

With climate change perspectives, it has become a necessity and everyone will play a role in a more responsible tourism in the mountains. As a tourist, our role is to choose our destination with caution and there are numerous factors that we need to consider. From choosing eco-friendly clothing and skiing gear, choosing how we get to our destination and in what type of accommodation we stay, up to the way we act on the slopes to preserve the beauty of the mountain for us and for future generations.

Other interesting info, that helped us write this article (among other sources listed in the article)

An article in French, from the Magazine Actu Environnement

Article from the Magazine, Enviro 2b