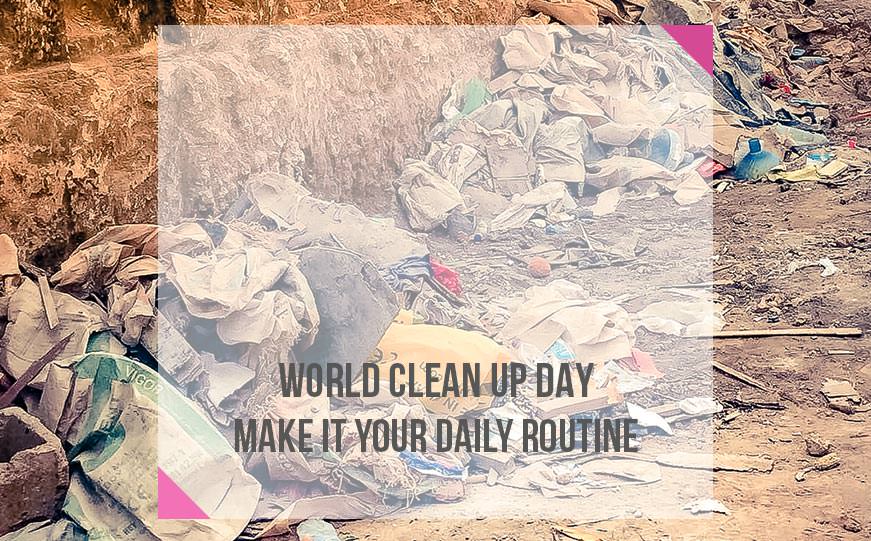 Saturday, September 15th is World Clean Up Day. A great initiative to raise awareness among the world population on pollution and trash. People around the world are invited to form groups in their neighbourhood to clean up streets, parcs, forests or beaches and report the quantity of trash they collected.

I can hear you, dreamers! You wish World Clean-up Day didn’t exist? Let’s prove you wrong.

Maybe you’re a real optimist or you live in a plastic/trash-free paradise (please tell us where?) but you must face it: there is a real mess outside. We all agree that to beat plastic pollution and waste in general, we should start by drastically reducing its usage in our daily lives.

But the trash is here, in our streets, on our beaches, and unless we clean it up, we all now know where it will finish. In a turtle’s nose, a bird’s stomach, and probably in your next sushi #bonappetit.

Reality is: the message still needs to be massively pushed (some people still seem to ignore what a bin is). These events can change habits and are needed to continue educating and raising awareness on how waste biiip.

On this world clean up day, we decided to share some initiatives that we came across, that don’t wait for the 15th of September to clean up their piece of the planet. They do it daily, have raised awareness locally or internationally. World Clean Up day is also a celebration of all these individual eco-warriors of the planet. And that’s what we’re about to do.

Celebrating World Clean Up Day is not new. It all started in Estonia 10 years ago, when 4% of the population  came out to clean the country from the illegally dumped waste in just a few hours.

Today, it is a celebration of all the local communities that organize local clean ups. It takes place every year in september and this year’s edition will take place in 150 countries!

How can you do you part?

Some made it their daily routine

Since a few years a new trend of taking time for ourselves to get personal stuff done before work (#mymorningroutine #miraclemorning) is said to change our lives, if not the world.

What if daily waste warriors became the new thing? Might be a little less hype than meditation, but what if that was a “glorious” way to change the world, removing one piece of trash at a time?

Here’s a few initiatives we found, that are easy to do whether you are at home or travelling the world

Difficult to list all the communities battling against plastic pollution on beaches, here’s a few of our favorite.

Sometimes it only takes 5 minutes

WE CAN DO IT TOGETHER !!! .#YES. . . . From French Polynesia ?? . #Repost @the_wild_walker ・・・ ⏱ 5 MINUTES is the time it took us to pick up all this trash on the beach. Wherever you go, take some of your time to clean up around you. By doing this you save marine life but also human race. Check out this great account too ??@5minutebeachcleanup. We hope that you won’t only stop at 5 minutes ?

The challenge is simple: whenever you go to the beach, take 5 minutes to clean up the spot you are on. The movement is growing, and Instagram is filled with people tagging what they collected, from Spain to Thailand or Greece.

All the usual plastic! 2 minutes from our dear @minibeachcleaner Working hard as per bless him ??♥️?

The 2-minute beach clean challenge originated in the UK end of 2013 and is led by an NGO run by Martin Dorrey and Tab Parry. After big storms that left trash and marine plastics along the UK coasts, the founders used Twitter and Instagram to inspire people to take only two minutes each time they headed to the beach, to pick the litter they saw.

Even easier, count to 3.

Coastal finds via @kristinecummins from Old Kona Airport Beach. What are you finding during your #take3forthesea ? #beachcleanup #hawaii #plasticpollution

In a similar idea, here’s the Take3 movement, that started in 2009 in Australia by Tom Silverwood. The message is quite easy: pick three pieces of rubbish with you when you leave the beach. Want to raise awareness about it? Tag it on the ‘gram using #take3forthesea

What we like is that go even further and organise a lot of actions to reduce waste at the source.

For example by helping communities that do not have access to municipal waste management programs. They have launched a program providing garbage receptacles in rural areas and organise volunteer-driven waste pickups to avoid people from burning and burying garbage.

For active and sporty travellers

Plogging is a movement that was originally born in Sweden in 2016. Plogging is the contraction of Plocka up (to pick in swedish) and jogging. So basically, run and pick up the trash you see.

NGO’s and individuals are now plogging around the world.

In France, plogging became popular thanks to Nicolas Lemonier who started posting the trash he collected during his running sessions. His posts became quite popular and he then created the Run Eco Team group on Facebook.

The group counts 22 K members and now has local groups across the country (Paris, Lyon or Angers) and even smaller groups in Marocco, Belgium or Algeria.

For urban travellers and hikers

Two movements you can follow and duplicate at your doorstep.

This challenge was born in 2015 in Eddie Platt’s mind while in Leeds and launched in Marseille France (#1dechetparjour) where he lives since a few years.

Since 2016, his NGO organises collective clean ups in well-known spots of the city. Eddie Platt also did a Tour de France of waste, so to say, to raise awareness on the problem.

The challenge is worth it, whether in Marseille or not, and Eddie aka Mr Bin is worth a follow on the #gram.

Here is an initiative we ?

In Summer 2019, he is planning to walk through France and Europe to clean up the countryside, the streets and parks. But not only! During his journey, he wants to meet and promote innovative companies and brands that make sustainable and eco-friendly products from trash or promote good waste management practices.

He’ll be launching a fundraising soon to get help for his clean walker tour. To get material to walk and clean up, and the equipment to film his project. He also wants to make a “trash backpack” made from recycled plastic to collect the waste he’ll find.

Since he started talking about his project, he also launched the #cleanwalker movement. Inviting everyone to pick up trash every day wherever they are. To join the movement, simply use the #cleanwalker hashtag in your pictures and stories to raise awareness on the project.

If you want more info on the movement or his trash hiking tour, follow him on Instagram.

All these initiatives and challenges are quite easy to adopt. Either at the corner of your street or while you are travelling. Some people might look at you strangely (#reallifestory) but we guarantee the satisfaction of cleaning your little piece of the planet is worth at least a 5-minute meditation session. And who knows, maybe people seeing you will join the movement too.

Of course, we could not state all the trash warriors of the world, and if you have initiatives to share with us, leave them in the comments! Happy World Clean Up Day